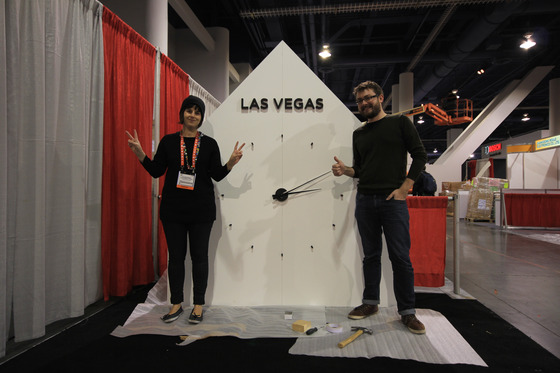 So I just came back from CES. The Good Night Lamp had a booth there where we launched our Kickstarter campaign and I thought I’d share what I learnt.

1. It’s expensive but worth it.
I booked the booth back in June 2012. It was a convenient deadline to push product development forward and I’m glad I did it. But we ended up spending about £13K and that’s for a 10 x 20 feet booth. It turns out that GES (the organisation that you pay money to for additional services on top of booth hire) don’t provide most of the services they claim to provide for small booths. We ended up spending $1.2K on site for things like curtain hanging, electrical layout, carpet and labour when we thought most of these services were covered already. We arrived a full 3 days before the opening and only got our services taken care of by the 3rd day. Being there and being nice about it mattered though because GES are massively unionised, so it’s a huge group of people basically constantly on break or at lunch. Having said that, it was a good platform for what we were doing and we had the right people talk to us, give us feedback and tweet about us. We never would have gotten that first kick if we hadn’t been there.

2. Only first day counts
I’ve designed and manned booths for Topoware at the Milan Furniture Fair and Lirec at CeBit and they are sortof the same as CES in terms of size but the rythm is totally different. Basically the first day is the only day that counts as it’s the only one the press will be roaming around. And if you haven’t dropped about 200 USB keys (we didn’t) at the press centre, you might not get CNN to come and see you. Press you see, have had a press day before the opening that you might not be able to pay for and then will only spend one day roaming the exhibition. Same goes for quite a lot of the corporate types coming from beyond California who will want to fly in on the Monday and fly out on the Thursday. Local Californian business people seemed to show up on the Thursday but we never reached the level of busy-ness of the first day.

3. Stick to the sides
For each hall, the large and most boring corporations were in the middle because they were the only ones with the budget to get a huge amount of square footage to sell hard drives, expensive musical robots, headphones or cloud computing services. All the interesting stuff happens in the smaller booths lining the walls of each hall. Lots of really weird little companies like ours trying to make it big. Those were the interesting things. The rest, except Belkin who had a pretty stand where you could actually sit down, were really dry and were the only ones to use booth babes.

4. Bring a packed lunch & some sweets
The food at CES is HORRID, overpriced, with long lines and a sad eating environment. We had lots of apples, bottles of water and snacks which saved us. We had bags of sweets which we handed out to people who came to visit the booth and that was good because visitors were walking around and wanted a sugar fix anytime in the late morning or after lunch. It definitely helped our traffic.

5. Be ready for America
(I won’t talk about the pastiche that is Vegas because that’s another blog post about post-cinema architecture.) This is quite a tech-friendly crowd but you’ll also end up meeting some fairly strange characters. We had some war veterans suggest that Al-Qaeda could put some bombs into our lamps and I was blessed by a right-wing christian woman for my idea. Just smile and breathe. They’re your customers too.